Some times in fishing you get to the point where you have to break new ground. So many people follow the crowds to nowhere, one boat picks a random spot, the next boat out has no idea so they join them and then before you know it 30 boats are all fishing in an area that hold no fish and is based on no reason. Anglers need to get out there and break new ground. There is no better feeling than finding your own secret hotspot, to find that reef or weed bed that nobody else knows about! So how do you go about doing this! Well put simply, time and effort! You need to use the combination of your fish finder/ depth finder and GPS.

When boat anglers are looking for new Snapper grounds, they should look for structure rather than schools of fish on their sounder. Schools of fish can move quite quickly so by the time that you have positioned the boat and set your anchor the fish have simply moved on. When your fishing over mud and sand look for weed and tube worms. These are identified by 1 pixel wide by 2-3 pixel high returns emanating from the seabed. These returns indicate structure, and it’s structure where the fish expect to find food. Look at it this way: If you’re travelling down a highway and you’re hungry you’re more likely to get a feed from a food outlet rather than eat a randomly disposed hamburger on the side of the road! Well fish are the same. By fishing the structure your adding your offering to the menu and increasing your chances of a hook-up.

To get the optimum out of your sounder your sensitivity should be set to the point where your “Clutter” (the snow like returns through the display) disappears. This is typically between 70% and 90% of your maximum sensitivity setting. All sounding should be done at a speed no greater than 5 knots.

Whenever you find a good location you should mark your position with your GPS and record the latitude and longitude in your fishing dairy along with the fishing details of the spot, for example, tide, time, fish, bait, moon and weather. This will not only give you a hard copy record of your “Hotspots” if your GPS looses its memory, but will also provide you with a record to track fish patterns and favoured conditions giving you an insight into the fishes habits and thus giving you the ability to better predict where the fish will be and thus increasing your catch rates.

At Mornington Boat Hire (03 59755479) this week we have continued to see a good run of snapper, the only pity has been that the fish have been best mid week not on the weekend when most head out. This year we are seeing some ripping flathead with each week producing at least half a dozen flatties over 50cm. While the snapper have been to 5kg and the fishing good for Mornington it’s only going to get better till med December. The whiting and the squid on the other hand have been quiet this week.

Boats departing from Carrum have been doing very well on the snapper, while snapper have been getting caught all through the day the early morning has been best. Pilchards, squid and silver whiting have been the best baits.

If it’s whiting you’re after then Western Port is your destination. Jonny from Yaringa Boat Hire (0428 001 286) reports that the whiting are going from strength to strength. He said that while the snapper have been hot and cold other species like gummy shark, flathead, mullet and salmon have kept anglers on their toes! The best tide has been the run out tide.

Off the surf beaches we have seen some good catches of salmon and a few flathead through the day and some nice gummy sharks at night. Best beaches have been Gunnamatta, and Kilkunda.

Out in Bass Straight there have been some nice gummy sharks, a few arrow squid, some nice flathead and snapper. Flinders Bank and the back of Rye has been the most productive.

In the fresh water I would now like to report that Devil Bend is now open to the fishing public. Anglers fishing the pontoons have landed some nice red fin to 30cm.

Till next week play it safe on the water 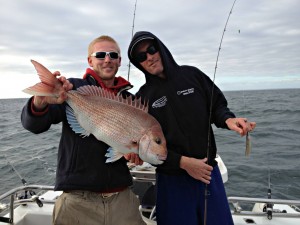