Well it’s not the fish that are hard to catch at the moment, its fine weather on a day off! So when you do hit the water it becomes even more important to make the most of your time. So often I see anglers head out on the high seas with only one type of bait, this can be a big mistake, so often fish will only eat one type of offering totally ignoring any other baits. it’s critical to have a good spread of baits, just to find the flavour of the day. For example, if you’re out after a snapper a good early season spread would be squid, pilchards, silver whiting and soury, this should be supplemented with a good quality burley. Baits should be fished with as little lead as possible, this presents the bait in the most natural form. When using burley in light currents burley from the top to the bottom. By this i mean throw pellets directly over the side, as they sink they burley the entire water column, or if you’re using frozen tubes simply tie them off against the side of the boat and as they thaw they will disintegrate and disperse throughout the water column. Now when you’re fishing the faster water the best position for the burley is the top of your anchor chain. This is because as the boat moves up and down it lifts the chain, this then shakes the burley pot and this aids in the dispersion of your burley.

In Port Phillip Bay the snapper are still a bit up and down, this is simply due to the weather patterns. However some great catches of fish are coming from Mt Martha to Chelsea. It would be fair to say that the fish are pretty much everywhere yet getting them to bite has been a little harder. While the surface temperature is getting up there, it’s still cold down the bottom. My Number one tip for this time of year is patience!

In Western Port Bay snapper are feeding a little bit more freely. Spots worth a try include Hastings to Warneet.

For those that are land locked the rocks at Mt Martha and Mornington are producing some nice fish and Brighton and Mordialloc are also worth a try.

Well the whiting are back up and about with some great catches. In Port Phillip Bay good catches have been made from Portsea to Mt Eliza. The best baits have been mussels, squid and pippies. Burley has been very effective in bringing the fish on. In Western Port Bay, we have seen some monster “Ting” with a few fish to 52cm being boated. Watson Inlet has continued to fire, best baits have been pippies and mussels.

While starting to slow a bit in southern Port Phillip there are still some lovely specimens being caught. The piers at Sorrento, Portsea and Blairgowrie are firing at night. In Western Port, Stoney Point to Tyabb continue to see squid to 3kg, best results are on Hirate squid jigs and silver whiting. Land based in Western Port, Stoney Point has been the pier of choice as Flinders and Warneet continue to be hit and miss.

Some great catches of flatties to 40cm have come from Mornington. 10-18 meters has been the best depth and squid and silver whiting the best bait. In Western Port the Quail Bank has seen some sand and rock flathead landed to 45cm. Best Baits being mussels and pilchards.

This week we have seen king george whiting to 52cm, grass whiting to 40cm, gurnard to 55cm, Garfish to 52cm, flathead to 45cm, squid to 2kg, gummy sharks to 10kg, Snapper to 5kg. Overall the fishing has been good with the weather we have had, the fishing will only get better. Best places to wet a line have been Watsons Inlet, Eagle Rock. 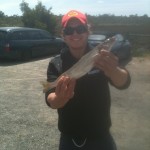